Practitioner Listings on Google My Business

A common question we get from Chattanooga business owners about Local SEO is how businesses that have practitioner listings should approach Google My Business. There is a lot of confusion around how to deal with these and if they help or hurt the business’ ranking on Google.

What is a Practitioner Listing?

A practitioner or professional listing is a listing on Google Maps that is for a person instead of a place. Businesses that have public-facing professionals that are known and searched by name would have these. Examples of industries that commonly have these would include doctors, dentists, lawyers, realtors, insurance agents, and financial planners.  Often people will search Google for the name of their doctor or lawyer instead of the name of the practice or firm. 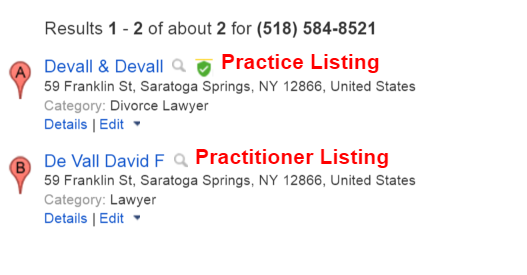 Top Questions Practitioners (or Practices) Have Regarding Their Listings:

What Are the Rules Around Practitioner Listings?

Should I Merge my Listings if I’m a Solo Practitioner?

The answer here is it really depends. If your business is in a really large city, I would probably vote to do it since you will reap the benefit of all the reviews being on one listing (so instead of 1 listing with 5 reviews, another with 10, you now have one with 15). However, if you’re in a small town you will probably get more visibility and exposure if you keep the listings separated since it’s possible to get 2 listings to both rank in the 3-pack for non-competitive terms.  As far as I can tell, Google has no automatic system that looks for these listings and automatically merges them so unless someone reports them as duplicates they should remain separated.

Last year in the fall, I believe Google changed the way they did merges internally. Since late 2015 we no longer see a massive ranking bump in listings that get merged for solo practitioners the way we used to before. I had a chiropractor I worked with earlier last year who had a massive spike in ranking when his listings were combined. This used to be common when Google merged listings but the way they are doing it recently doesn’t appear to pass ranking juice from the duplicate to the main listing. I have a theory that it’s because they started using 302 redirects to help prevent data issues.

Keep in mind that it’s possible that some directories won’t allow you to merge the 2 listings so it might hurt citation consistency. Yelp, for example, has told me that they don’t automatically merge listings for a solo practitioner but if requested, they will consolidate the 2 listings (and merge the reviews) but they use a format that is the opposite of what Google uses. So while Google lists it as “ABC Law Firm: Bob Smith”, Yelp will list it as “Bob Smith – ABC Law Firm”.  I don’t think this is a huge issue considering Google’s ability to normalize data.

Should I Verify Listings for all my Practitioners?

My rule of thumb is that if Google doesn’t have a listing currently for a practitioner at your office, don’t bother creating one for him/her if your goal is to make the practice listing rank highest.  Usually more listings just creates more competition for yourself.  As well, verifying your practitioner’s listings could be problematic if they decide to leave your office and work elsewhere. According to Google, they would own the listing, not you.

I usually would suggest verifying the listing you want to rank and having that listing point to the homepage. I would then leave the website off the additional listings (or point it to an inner page on the site like the doctor’s profile page).

On the flip side, verifying the practitioner listings will allow you to monitor and respond to reviews. However, if you’re not actively trying to get reviews on them, hopefully you won’t get many.

Another good strategy is working on having multiple listings rank if you have practitioners that specialize in different things.  Let’s say you have a chiropractor who also has a massage therapist at his office.  The massage therapist’s listing could link to a page on the site that ranks high for massage therapy and the chiropractor could rank to the page that ranks highest organically for chiropractic terms. This is a great way to make the pages accomplish more overall instead of competing.  Another example would be a law firm. You could have the main listing for the law firm optimized for things like “law firm” and then have 1 lawyer who specializes in personal injury law and another lawyer who specializes in criminal law.  This would allow you to take advantage of the organic ranking for several different keywords.

Keep in mind that if your goal is to have 3 of your listings all rank for the exact same keyword on Google, thus monopolizing the entire 3-pack, this is an unrealistic strategy. Google has filters that keep the same website from appearing too many times in the results and unless you’re in a really niche industry or market, it’s almost impossible to accomplish this.

What Should I do if my Practitioner Listing Outranks the Practice Listing?

I would say it depends on which listing it is and what the ultimate goal is. If it’s the practitioner listing for the owner, who would clearly not be likely to leave the practice, I would go with what Google prefers and focus on the practitioner listing. If the listing is for an employee who could, at some point, leave the practice, you should consider what is more important: ranking faster or having more long-term security. I had a law firm hire me recently who had 2 lawyers. We worked on all 3 profiles: the 2 listings for the lawyers and the 1 listing for the firm.  Several months in, the one lawyer left the practice and started her own firm. The remaining lawyer was annoyed that her listing continued to rank well (and even outrank his in certain occasions) and the hard truth was that her profile was strong because we had worked on it.  So when she worked for them, it helped them, but when she left, the strength of the page left with her.  It’s always important to consider this.   For businesses in this boat, I would suggest editing the practitioner listing to try and minimize it (remove all but 1 category, link to an inner page on the site instead of the homepage).  Then I would work on trying to boost the ranking of the practice listing by asking for reviews and making sure that listing is the only one that links to the homepage of the website.  Although it’s often faster and easier to work with the existing practitioner listing that is currently ranking highest, it is possible (with time) to get Google to accept the practice listing as the strongest. The downside to this strategy is that it takes longer and requires more work.  Keep in mind, the age of the listing (how long it’s existed) is a huge ranking factor that I wouldn’t ignore. If the practitioner listing has been around much longer and has much more history, it will make this harder to do.  This is why we always generally don’t answer this question for businesses without doing a thorough audit.

One of my Practitioners no Longer Works Here, What Should I do With Their Listing?

One of the most annoying issues is when a practitioner leaves an office. Technically, the person owns their listing, not the practice/company and removing the listing entirely is not an option. Google often suggests that you mark the page as closed, but this is a terrible idea since any patients or customers would think the business is closed when searching for their practitioner by name.

Instead, this is what you should do:

1. If the listing is verified via GMB you need to first get it unverified (if possible). If you don’t have access to where it is verified, this is the worst-case scenario since Google might refuse to give you access since they see the individual as the true owner (not their employer).

If the practitioner was verified by the former employee and you have no access to it, you have the option of either leaving it alone or reaching out to them to update it to list their new employment information. Neither of these options are ideal which is part of the reason why I don’t generally suggest verifying practitioner listings. 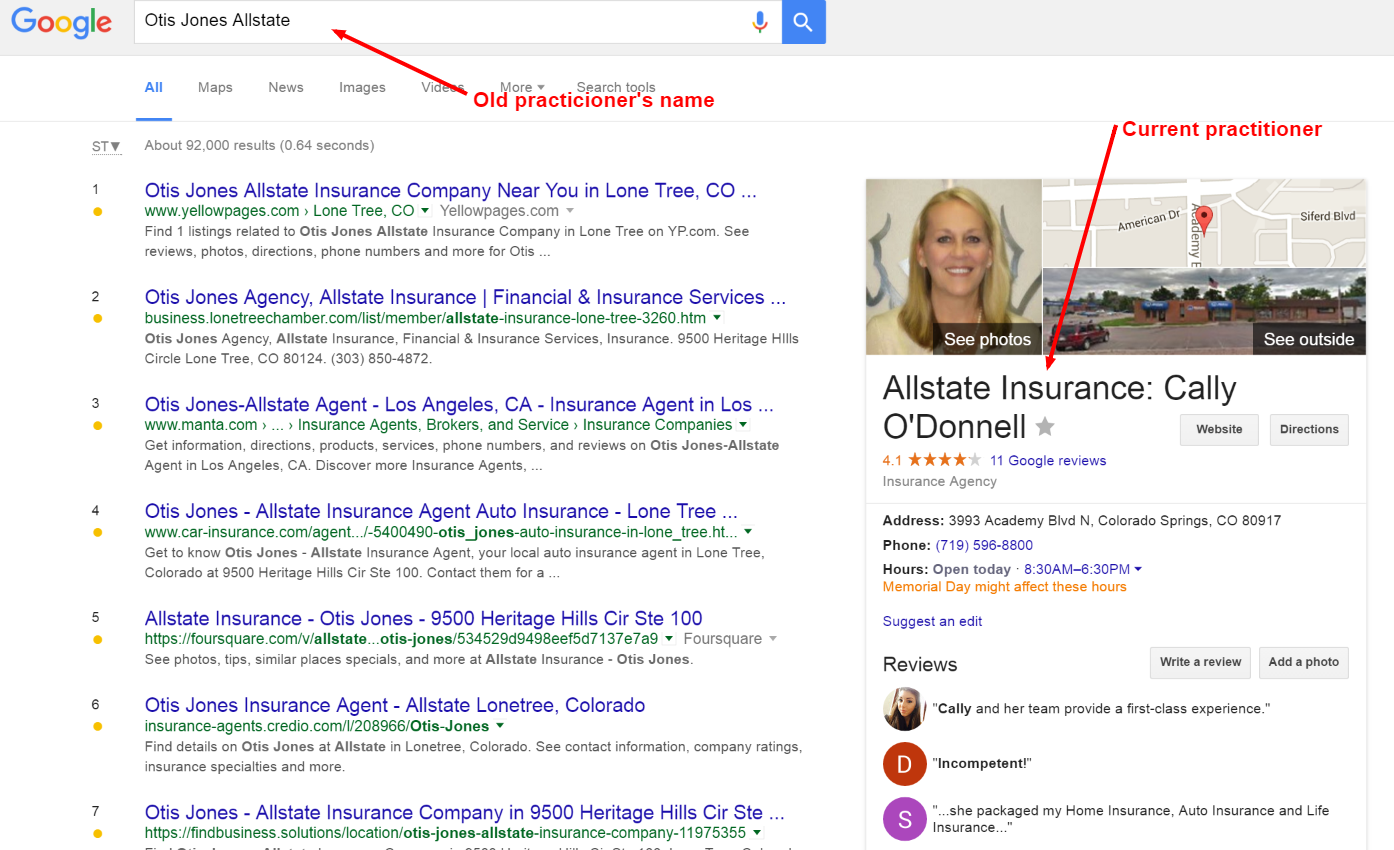 How Should I Build Citations for a Practitioner?

I would always focus heavily on niche citations for any industry that has practitioners. So if you’re a lawyer, make sure you’re listed in Avvo or if you’re a dentist make sure you’re listed correctly on HealthGrades. There are tons of social media sites and directories that allow more robust features for individuals as opposed to businesses and this is something you can easily take advantage of with practitioners.  For example, LinkenIn allows individuals to list several links on their profile page to different sites and even allows them to customize the anchor text. This isn’t something a listing for a business on LinkedIn is able to do.

Do you have a question about practitioner listings that I didn’t address? Please let me know!

SEO & Local Citations: How Google My Business Helps You Get Found